Culture, Motivation, and Giving Back: The “Green Bell” Phenomenon A few weeks ago, as the new Baseball/Softball Rebellion HQ facility in Durham, NC started to come together, we purchased a giant green bell that we hung up by the door.  Players, when achieving a new record on the HitTrax or Rapsodo devices got to ring the green bell.  The idea is allowing players, young and old, to be recognized for their own achievements, has now turned into much more, and clearly is changing the culture here at Baseball Rebellion HQ for the better.

The culture at BR/SR is something that means more to me than anything other than my family.  Many of our instructors are here over 60 hours a week, and some even more than that.  The work and training environment at The Rebellion is one that the players, parents, instructional, and front desk staff must enjoy and feel a part of, or it all comes crashing down.  Baseball and Softball are sports of controlled aggression and also dealing with failure.  Making sure players understand that their lessons are a safe space to try new things, make mistakes, see how fast and far they can hit it all while asking questions and having a healthy dialog with their instructor is so hard to do.  With the green bell, we figured would be a fun way to make it a little bit more competitive among the athletes.  No one wants to have a ‘bell-less’ lesson now.  They strive to push themselves to hit or throw the ball higher, faster, and farther.  While this has been a huge change and a LOUD change, more change was to come.

The first client to ring the green bell was Kelly B.  A freshman D1 softball player.  Coming off an injury, she had some concerns about her power and bat speed returning to peak form before her season started.  When she got her first “green” number (when you set a record on the HitTrax the max distance or max velocity number turns green) she skipped out of the cage and rung the bell.  I clapped, other instructors did too, and we went about our lesson.  Later, another kid in another cage, who was much younger than Kelly, got to ring the bell as well.  He sprinted from the cage, rang the bell as loudly as he could, and this time, the instructors, Kelly, and even the parents watching clapped.  He got numerous high fives from parents and spectators he didn’t know as he ran back to his cage to keep smashing balls.  We were 2 bell rings in, and Dave and I looked at each other, and we knew this was something that the entire BR/SR community would get behind.

The Green Bell Giving Back

How does the “Green Bell” give back?  As many of you know, the Launch Angle Tee is taking off!  I had been working on the tee for 4 years on and off when KC Judge and I met Brent Wright.  Brent is a prosthetist who makes arms and legs for his patients but also has a charity called LifeNabled, which does the same thing, free of charge, for kids in developing countries.  He helped KC and I design the tee and adapter top, so when it came time to go to the market I wanted to make sure I gave back to him the same way he gave to me with his time and expertise.

My phone rang late a few nights ago, it was Brent.  His son, Connor, had just had a lesson and got to ‘ring the bell’ which he loved.  Brent said, “what if we make ringing the bell something that allows Baseball Rebellion and Launch Angle Tee to ‘give back’ with a donation to LifeNabled?”  At first, I wasn’t sure how we could get that done logistically.  “Dollar for every Dinger” was the first idea, really hard to keep track of that over the course of a day.  I was thinking maybe we give 10 dollars for every ‘new record’ or ‘green number’ on the HitTrax.  That means each time the bell gets rung, the player has ‘earned’ 10 dollars for LifeNabled which makes prosthetics for kids in need.  Brent and I settled on the 10 dollars for every Hittrax PR.  What’s really cool about that is every single time the bell gets rung, not only has the hitter or pitcher set a new personal record, but some kid in the developing world gets that much closer to walking without a crutch, riding a bike, or jumping around playing with other kids in their city or village.  BR/SR/LAT will donate 10 dollars per personal record achieved inside our Durham Facility up to $15,000 between now and April 30th. 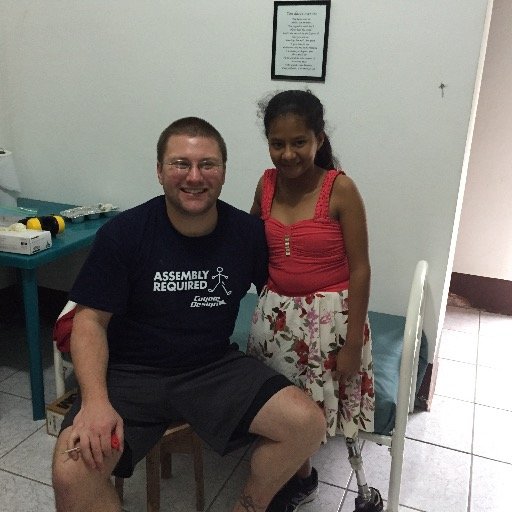 “I am so excited to see how a positive action like setting a new PR will have another positive action that results in giving the gift of walking, running, and simply being a kid to someone else.  What a revolutionary way to get athletes motivated and also have a life-changing impact. We are thankful to Chas and his team for allowing us to be a part of this initiative. Now go hit some PR’s!”

I’d like to invite all of you reading this, whether your a Baseball Rebellion Fan or a Launch Angle Tee user, to check out the LifeNabled donation page https://lifenabled.org/donations/ and perhaps you’ll feel compelled to become a part of the Baseball Rebellion/Launch Angle Tee movement of giving the gift of mobility to a child in need.  BR/SR/LAT will be doing similar “give-backs” in the future, as we have been so fortunate to be in the position we are in to help players of all ages realize their dreams in baseball and softball from all over the world.  We all know that the Green Bell Gives Back initiative will get people even more excited about their abilities to help others and excite them even more to push the limits of their swings and pitching deliveries.